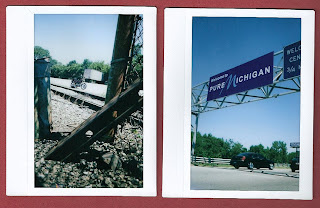 Took the 360t back to Michigan for the 4th of July. Back roads mostly and the interstate when I felt like flying. 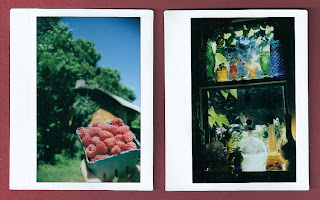 Got a little hungry and followed signs for "glorious berries" along Red Arrow hwy.

Met my brother and nephew at a produce stand near the Jericho station at Airport Road and M43. We rode into Kalamazoo together. Henry never got tired of watching me out the window. Squinting in the sun, he smiled ear to ear when I passed and strained in his car seat to look out the back window when I'd fall behind. Henry jumps off of Mark's porch into his Dad's arms.

John Ripple oils my chain at his shop before I get back on the road. It worked out nicely to front load my pack so I could put my feet on the back pegs and lay down on the gas tank.

I hauled ass for an hour and a half but broke down outside Valperaso, 50 miles east of the city. I pushed it a ways to get underneath an overpass and out of the sun but before I made it, somebody pulled over ahead of me in a Chevy Astro. Trying not to hear my Mother's voice and keep my head on straight, I eyeballed every sticker, memorized the license plate and scanned the dude head to toe. "1975?" he nails it. He's 60 something, an ex marine, and a Vietnam vet. Off the bat he's the bossiest stranger I’ve ever met. He's nice but a know-it-all and kinda irritated about something. Maybe my attitude. I stand my ground because I don't like people touching all over my bike just because they had one once. He was asking me all kinds of questions and I was trying to cool my jets because I might need his help. My bike wasn't hot, I had gas and my battery was charging above 13v but it still wasn't turning over. When I couldn't get the fuel lines off the filters to see if they were clogged, Ed cut them with a pocket knife. He was trying to be a marine but I was pissed. He offers to take me into town. He moves his wood chipper onto the top of the bed he built in the back to make room for my bike. I'm stalling. I mean, this is a horror movie script. With one wheel in and one wheel out of the van, I balked and said "forget it." He turned to me, bike balanced on his thigh, and said "Look, you need to decide one way or another. We can do this. If you commit, this bike will be in the van in 30 seconds." He could be bat shit crazy but at that moment, it was just a choice: in or out. Soccer Mom's and Harleys were blowing by me like I was roadkill. You gotta know when to fold em. 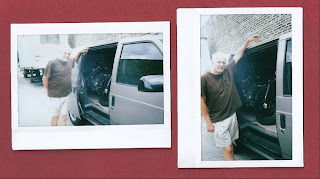 We fought half the time but he drove me all the way back to the city for good karma and a picture. He rode off waiving the polaroid, laughing and yellin' down the alley. He was already working on the story he was going to tell his friends.